Bizarre Vending Machines  Candy and soda vending machines are common; you see them everywhere, but did you know there’s a whole world of machines out there. These machines are vending all kinds of unique offerings that you may have never seen before?

Have you seen any of these machines while on your travels? Let us know in the comments! Have an idea for a vending machine-based business that just can’t fail? Then hit up https://www.amequipmentsales.com/ and they’ll tell you how you can get started on your very own vending machine empire! *Ancient Greek vending machines worked by placing a coin in a slot, and it dispensed holy water. It was first invented by Heron.*

Today’s vending machines have evolved into complete automation dispensing systems that can vend a wider selection of products.
The 24/7 fitness centers have also recently become very flexible to its clientele needs by giving them a way to use their facilities with flexible hours. Fitness center vending machines is a way to provide customers essential things such as water and protein drinks as well as vitamins and other supplements that your clients use. Why settle for a gym vending machine that only dispenses your typical overpriced Gatorade or energy drinks, when you can get a machine that can dispense multiple items from the same machine. Our fitness AMS vending machines can be customized to sell products to your customers right at the location. Fitness and health clubs as well as other physical fitness and activity facilities the machines is a great addition to your current business equipment. Just like the weight machines and other service needs, the vending machine placement is an important part of your layout. You can provide items to your clients 24 hours a day. With no need to take away an attendant to assist the customer with a sale of an article.

Vending machines can showcase a wide selection of products and are fully electronic and can be customized to fit your needs. Systems can be cash or credit card payment systems or both. You can add additional add-ons like touchscreen display that allows you to keep track of your inventory. Looking for a basic lower-cost way to provide these items to your customers? Having a vending machine will work for you.

We can provide you with information on different equipment you can add to your machines. You can be able to monitor what products you have sold. You can also see what machines need to be restocked and what products are selling well. With so many gyms and fitness centers moving to 24-hour formats to accommodate their member’s needs. It is a good feeling knowing that you can keep your clients satisfied.

Adding custom graphics to match your decor is no problem.

We can custom wrap your machine to give it a look that says wow look at me.
Our gym vending machines are just so versatile that they can be changed over to accommodate new products or rotation. Fitness centers all over the country are seeing customers come thru the door. Why not provide the many items they use for their workouts? If you are like me its hard to carry around all those different supplements, vitamins and other pre and post-workout products. Many come in way too big of a container to fit in my bag. Well why not give them single-serve portions right at your location!

Vending machine technology is ever-evolving, from the days of holy

water dispensed at the drop of a Drachma to a world where live animals can survive inside a machine, convenience vending is a rapidly changing industry. Some of the Vending Machine technology advances to hit the industry have been subtle enough to avoid public recognition. Others have amounted to great fanfare (Redbox, anyone?) – whatever the case, vending machine technology is cutting edge…

Today 90% of all Vending machine sales have credit card readers installed. Vending machine technology has been advancing so rapidly that some machines accept payments from your cell phone.

Napa Valley Vending has come up with a novel idea, the Vending Miser. This senses when no one’s in the room with your machine and powers it off. Thus, saving money and electricity. Savings aren’t huge, only about $150 per machine per year. But, it’s got to be good for the planet. Besides, what’s more fun (or terrifying) than a vending machine that magically turns itself on when you walk by it?

Saving the environment is the name of the game for Coke and Pepsi. Both have worked tirelessly to reduce reliance on Hydro-Fluorocarbons to power their machines. Hence, the introduction of HFC-free machines at the US Capitol. These new machines are cooled by natural refrigerant gas. This is positive since the last thing Capitol Hill needs is more hot air.

A breakthrough in conventional medical care or another sign of the impending apocalypse, depending on who you ask, pharmaceutical vending machines are becoming less of a rarity and more of a common sight in cities throughout the US. The machines process prescriptions entered remotely by a doctor then ask patients for a code, dispensing medications with a few simple buttons. These vending machines should do wonders to pacify the angry mobs that claim doctors just aren’t doing enough to make them feel like a number rather than a patient.

Vending machines can make a company’s products available where people may need or want them. For example, Snapchat, a well-known media company, has adopted a strategy of placing their sunglasses in vending machines and randomly placing a machine outside a location across the country. Snapchat’s marketing idea has become a huge trend among young consumers. The non-traditional use of vending machines was a big winner for Snapchat, and many companies are following suit.

Vending machines lend themselves well to advances in technology, though some question how far we can push the limits of human decency when so many life-altering products are served via the push of a button. The answer to that question is more philosophical than practical, however, and technology must keep pushing on. So if you’re still rocking a flip phone and manual car windows, perhaps you’re just not the target market for this new generation of 21st-century vending machines…

Vending machines have come a long way since the first one was invented in ancient Egypt, when a mathematician invented a device that dispensed holy water in return for a bronze coin.  Here are 10 Curious Places To Find A Vending Machine

First Up on our 10 Curious Places To Find A Vending Machine Is  Vending at the bottom of a ski slope. Reminds us of our  AMS 39 “Outsider 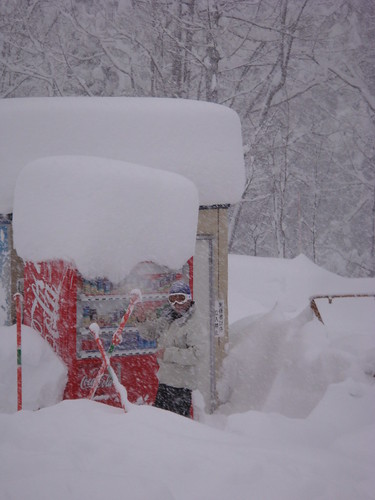 Japan is the kingdom of vending machines  At slightly over 5 million nationwide, vending machines are everywhere in Japan.They are on nearly every block in Tokyo and dotted across even the most spartan landscapes in the country’s vast rural expanse 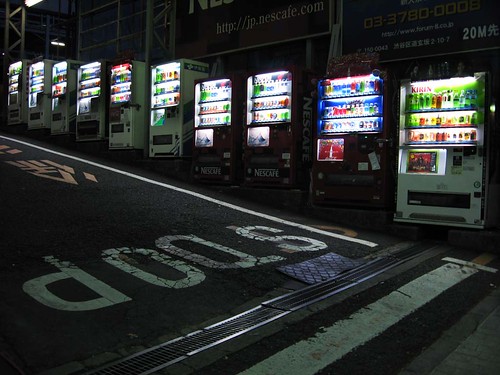 The person who thought of the vending machine is a genius for 2 simple reasons: you don’t need to hire personnel to man a vending machine like you would a store, and this keeps things in stock and available for the masses, 24/7. While most of the vending machines you are used to would dispense coffee, soft drinks, packaged food and snacks, these days we can find a lot more variety being offered. Milk 24/7 – Vend-A-Moo 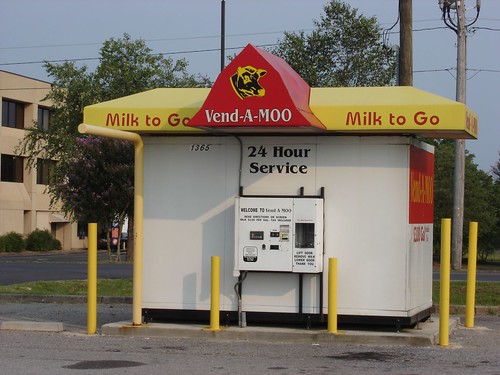 Another corner in Japan to get your vending done 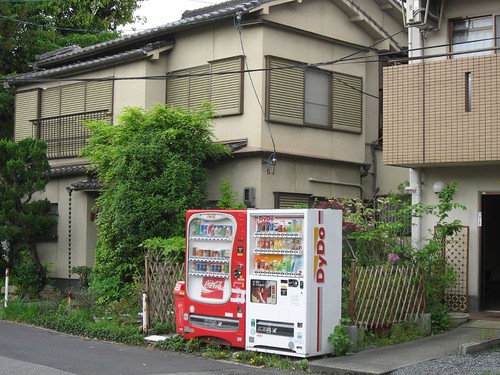 Possibly the most remote vending machine in Iceland

” Inside the hut is a vending machine and a guestbook to leave comments about this hidden tourist attraction.” 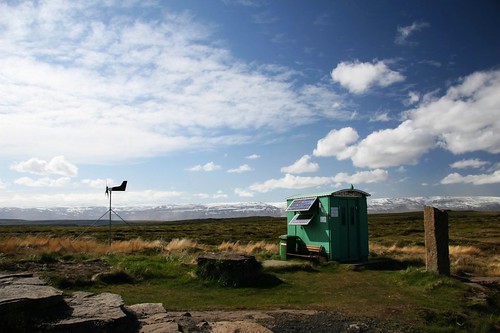 Hikers at the Mid-Hike vending machines 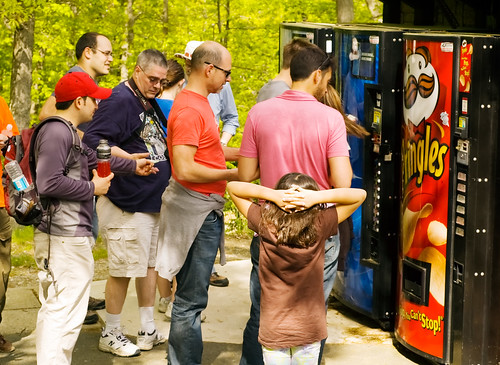 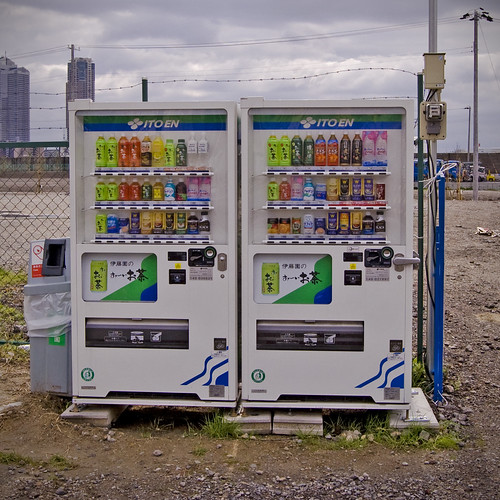 Sometimes you just gotta have a Pepsi 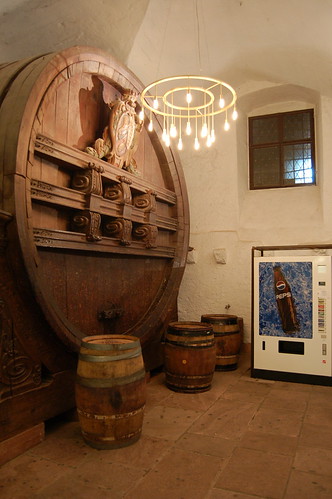 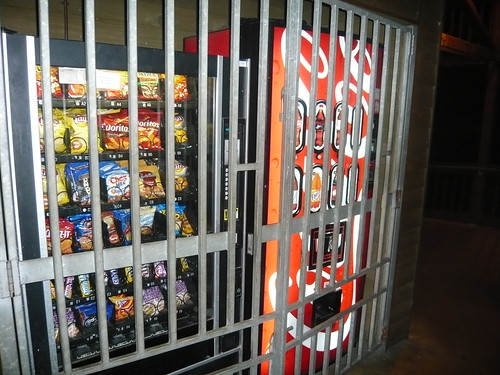 While you’re thinking about it, if you’d like a good deal on a vending machine we’ve got that too.

Taking a trip around the world, maybe even your own country will reveal a wide variety of machines of all shapes and colors. Anyway, enough introduction let’s get stuck in shall we?

The following are in no particular order and we apologize in advance for the apparent lunacy of some of them. We did enclose the adjective interesting in speech marks so consider that a caveat of sorts. The first entry certainly is, as for the others we’ll leave that “in the eye of the beholder”. A lot is included for the unique contents they dispense, you’ll see what we mean. Enjoy. Could this be the biggest vending machine in the world?

the HUMAN Vending Machine is a very comical video click below and view the Human Vending Machine. Can you imagine how the world would be if all machines where to be manned by a human? If you think this in interesting check out our Biggest Vending Machine blog.

Kit Kat has dropped a few Human Vending Machines into London’s Victoria Station as part of its new U.K. campaign. The isn’t new—the Japanese, always first in all things vending machine, have employed them. But this execution really fits nicely with Kit Kat’s “Working like a machine?” campaign. The TV spots, “Checkout” (posted below) and “Arrivals,” show people literally working like machines and then getting (you guessed it) a much-needed break. The effort is apparently part of Nestlé Confectionery’s biggest U.K. ad campaign ever, with a total spend of £21 million.